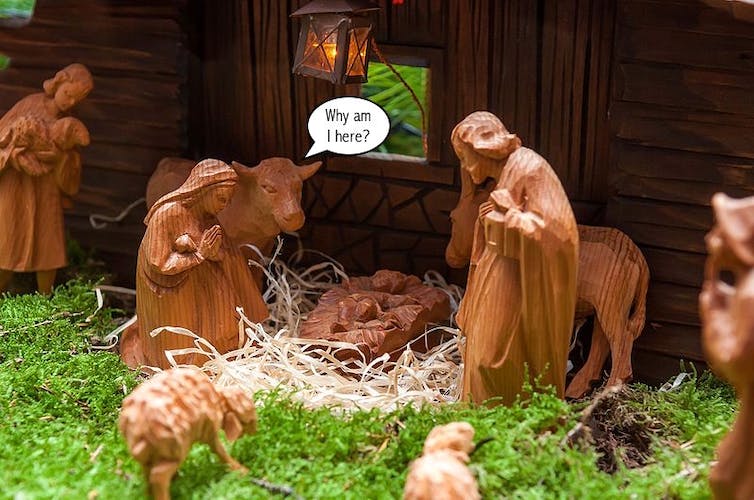 Animals are commonly found in creche sets, but surprisingly not in the Bible.
Marco Verch, CC BY-SA

From nativity plays to crèche sets to Christmas cards, animals are ubiquitous in our vision of the birth of Christ – but according to the Bible, not a single animal was there. Where did all these animals come from, and why are they now so central to the story?

Only two parts of the Bible talk about Jesus’ birth: the Gospels of Luke and Matthew. Mark and John skip over Jesus’ infancy and head straight to his adult life. So how similar are the narratives of Matthew and Luke to the version familiar to anyone who has attended a Christmas church service or children’s nativity play? Christmas carols such as Away In A Manger sing about the cattle lowing – and in Little Drummer Boy they keep time. There’s even a song called Little Donkey about the beast that carries Mary to Bethlehem in our vision of the Christmas story. But do these images appear in the actual Gospels?

All of our stable and manger imagery actually comes from just one Gospel – Luke’s. In Matthew’s Gospel, Mary and Joseph seem to already live in Bethlehem, and Jesus is born in a house. The magi – the three wise kings – visit Jesus in this version. Luke, however, gives us an account of the long journey from Nazareth to Bethlehem – and the visit of the shepherds.

The first animal we might expect to meet in the Christmas story is the dutiful donkey, the faithful beast of burden carrying the pregnant Mary on its back. But you may want to sit down, dear reader, for this next part. Mary did not ride to Bethlehem on a donkey. Nowhere in any Gospel does it say that Mary did anything but walk. The whole journey is given in three lines: Joseph and Mary went to Bethlehem and while they were there, she went into labour. No mention of transportation.

Now you will say, well, what about the sheep? “While shepherds watched their flocks by night” is the refrain we hear. But that’s from a carol – the biblical text doesn’t say that the shepherds took any sheep with them when they went to go and find Mary and Joseph and the baby.

The shepherds go to Bethlehem and find, as Luke says: “Mary and Joseph and the child lying in the manger.” But the Bible makes no mention of animals adoring the Christ Child.

Luke says Mary put the baby Jesus in a manger but the place where she gave birth was not necessarily a stable. Mixed-use space, where domestic animals such as sheep and cattle shared living and eating quarters with humans, was the norm in the area at the time. So it would have been normal for Joseph’s relatives to share space with their animals. But once again the text doesn’t say that a single animal was present at Jesus’ birth or afterwards.

The earliest nativity scene in art, from a fourth century Roman-era sarcophagus.
G.dallorto from Wikimedia

But our vision of Luke’s account has embedded itself in the imaginations of artists and performers, as our current nativity plays attest. Every child gets to be an animal visiting the baby Jesus, even though there isn’t a single animal mentioned in the Gospel accounts. 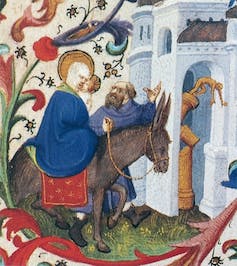 Toppling of the Pagan Idols (Flight into Egypt).
Bedford Master

So if the Bible is surprisingly silent about the animals’ role in the night’s events, where do they all come from? The answer is that Luke’s version won over the imaginations of lots of early Christian writers, although with some differences.

An early Gospel story that didn’t make it into the Bible, known as the Proto-Gospel of James, was written in the second century AD and describes in great detail Joseph and Mary’s journey and Jesus’ birth away from the comforts of home. It’s here that we finally get our loyal donkey: the text says that Joseph saddles up a donkey and puts Mary on it to ride the long journey to register in the census (James 17.2).

James sets the birth in a cave the couple pass on their way rather than a domestic space. Mary says to her betrothed: “Joseph, take me down from the donkey. The child inside me is pressing on me to come out” (James 17.3). 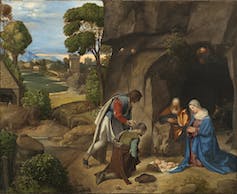 Did Mary give birth in a cave? Giorgione Adoration of the Shepherds, National Gallery of Art.
Wikimedia

Joseph leaves Mary in the unoccupied cave and goes off to find a midwife. A later Latin text from the seventh to eighth century AD, called the Gospel of Pseudo-Matthew, takes James’ version of the nativity story and elaborates on it – in this version, Mary leaves the cave after Jesus is born and takes him to a stable. Finally, the famous ox and ass enter into the scene, bowing down to worship Jesus. This well-known scene is still immortalised on Christmas cards thousands of years later – but it was never included in the Bible text.

Some of these apocryphal stories go even further. If ordinary animals worshipping the Christ Child seems impressive, how much more extraordinary is it that Pseudo-Matthew includes wild animals, including lions, leopards – and even dragons – coming to pay homage to the baby Jesus. Pseudo-Matthew writes:

And behold, suddenly many dragons came out of the cave … Then the Lord, even though he was not yet two years old, roused himself, got to his feet, and stood in front of them. And the dragons worshipped him. When they finished worshipping him, they went away … So too both lions and leopards were worshipping him and accompanying him in the desert … showing them the way and being subject to them; and bowing their heads with great reverence they showed their servitude by wagging their tails. 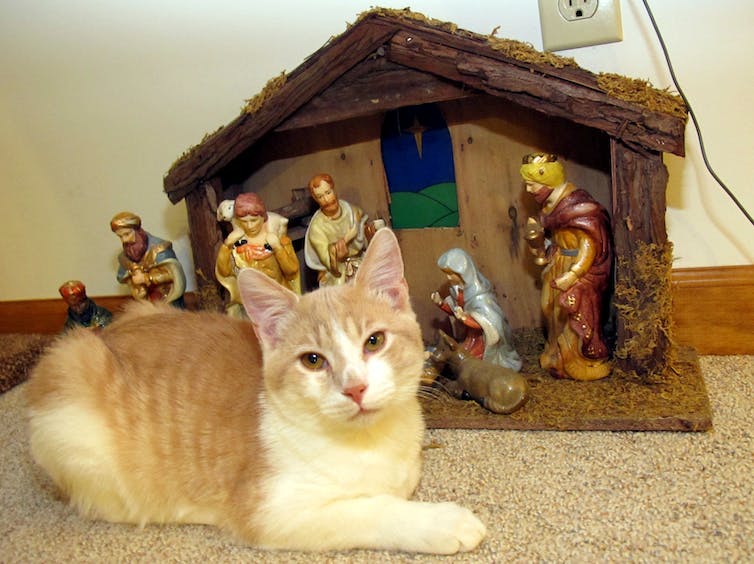 Wild beasts bowed down and worshipped him.
Flickr user Frankieleo

Images of animals behaving peacefully is a frequent image in the Bible. They are meant to symbolise a time of peace, so it’s no wonder our idea of the birth of the Prince of Peace includes animals. Surprisingly, we don’t get too many dragons, leopards, or lions included in Christmas nativity sets. But seeing as the ox and the donkey are just as unbiblical, why not?