The posting of 95 theses is not the only act for which Martin Luther is famed. In 1522, he began the work that would last a lifetime: translating the Bible. This was not a neutral act. If we can trace society’s influence on tales of his theses’ posting, we can also see similar factors at work as Luther deliberated over what a German Bible should say.

Luther’s was not the first German Bible translation. When he translated the New Testament, there were already 18 German Bibles in print. What was different about Luther’s text? Partly the source – older Bibles were based on the traditional Latin text attributed to Jerome (circa 400AD). Inspired by humanist scholars such as Erasmus, Luther translated from Greek and Hebrew – the original biblical languages.

He was also determined to communicate God’s word in a way that would strike people afresh. Like William Tyndale in English, Luther coined new words and deliberately reworded well-known texts. Christians who had been used to “Ave Maria” (Hail Mary) now heard an angel give her “Greetings”. A natural translation, Luther argued, would be simply “Liebe”, that is “Dear…” Mary.

But Luther well knew that in rewording this New Testament dialogue, he was undermining centuries of “Hail Mary” penance. Jesus’ command to repent – “poenitentiam agite” – interpreted in the medieval church as “do penance” through ritual actions, provided the starting point for Luther’s 95 theses, because of his distaste for indulgences, which he saw as a corrupt form of repentance. In Luther’s view this – and the notion that Jesus’ mother had power over Christians’ destiny – were flawed.

If the changes Luther introduced were sometimes visibly doctrinal, there were other concerns at work, too. Translating the Bible into everyday language involved deciding how to frame a text that would shape everyday life.

Though the New Testament was complete in 1522, a full Wittenberg edition of Luther’s Bible did not appear until 1534. By that point, other reformers – most notably Ulrich Zwingli and colleagues in Zurich – had completed alternative translations from the original languages.

Why were they ahead? Luther’s work seems to have stalled in 1525. That year, tens of thousands died during the German Peasants’ War, an uprising prompted in large part by the notion that the Bible (and God) supported the cause of the lowliest in society. In the aftermath, Luther became more reticent about who should read the Bible and when.

Evidence of this rethinking can be seen in the book of Ruth, the story of a widow who emigrates with her widowed mother-in-law, marries Boaz – a relative of her late husband – and so becomes the great grandmother of King David. Luther first translated this short Hebrew text in 1524, revising it very slightly for a 1525 reprint (the speed of reprinting is itself an indication of how eagerly his work was received).

By 1540, Luther was once again revising the Bible. This time he worked with a team of colleagues. The records of this work include notes taken by one of the team and marginal annotations that Luther himself made in a copy of the Bible, along with the published revision. They got to Ruth on April 7 1540. There was not much to edit here, but Ruth 2:7 presented a particular challenge.

Scholars today are uncertain how to fit together the last Hebrew words of this verse, which are: “this”, “rest” (or “stay”), “the house” and “little”. The landowner (Boaz) has asked his harvest manager about a strange young woman (Ruth). The manager’s answer seems staccato, words piled together without due grammatical attention. Some have suggested this is stylistic – that we are meant to imagine the manager stammering his response.

Ruth has arrived at the field, hoping to gather leftover grain after the harvesters. But has she been stood waiting for an answer, an example of patience? Was she on the verge of giving up and going home, heightening the drama of Boaz’s sudden arrival? Can Boaz see her sitting indoors? One scholar traced 18 different ways of translating the passage, gathering together Greek, French, English and German texts through to the present day.

The 1540 records show Luther and his fellows agreeing first that Ruth is a “fromm” – that is a “proper” or “pious”, woman. This opinion intrudes upon the biblical text in chapter one, and recurs as a remark on Ruth 2:10. Right after that note, the discussion turns back to verse 7: “Her stay in the house is little”, the minute-taker writes in Latin. “A comment on her habits”. In Luther’s own handwriting we learn that Ruth is not like other women, accustomed to lounging around at home. 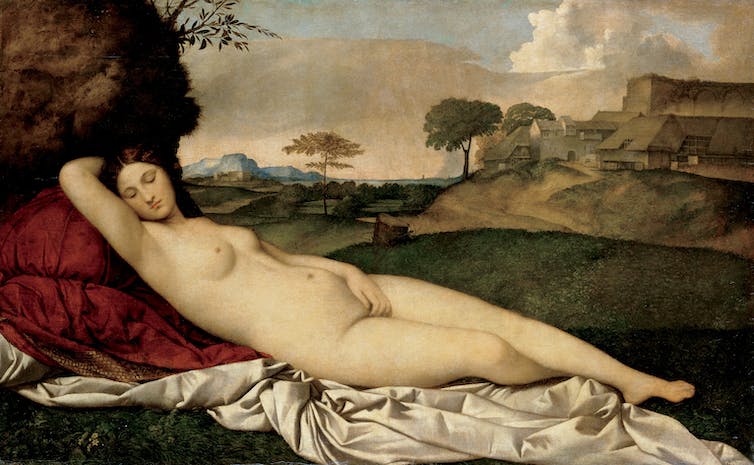 Midway through this remark, he switches from Latin – the language of scholarly discourse – to the language of his target audience. In the printed German Bible of 1541 and its successors, the whole sentence appears in the margin. 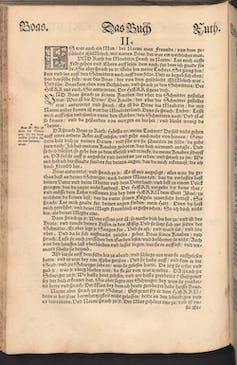 
Difficult Hebrew words are taken out of context and turned into a commentary upon her whole character. Luther is convinced that Ruth is a decent woman. The textual uncertainty is determined by her model status: modelling the best of possible female behaviour.

In Ruth, the ready and willing worker, we sense the beginnings of what Weber would term the Protestant work ethic. That ethic is normally associated with the later Reformer, John Calvin, whose teaching about predestination created an anxiety that drove Protestants to ensure they spent their time well. But in the margins of the 1541 Luther Bible and its successors, we can see that concern already at hand. Good women should not be idle.